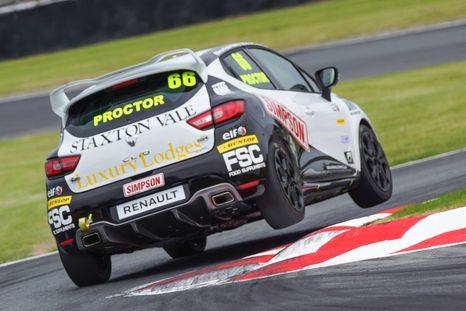 Bee Health, one of the UK’s leading vitamin and supplement manufacturers, has announced its sponsorship of local racing driver Senna Proctor. The 17 year old enjoyed a strong debut year in the Ginetta Junior Championship in 2014 bringing a podium in the main series, before taking a trio of top three results in the Kick Start Energy Ginetta Junior Winter Series.

In 2015 Senna remained in the Ginetta Junior Championship driving under the Team BMR banner and finished the season as the top points scorer of the championship. After post race count back he finished 2nd overall, picking up 13 podiums out of 20 races including 4 wins along the way.

In 2016 Senna will be racing for Team BMR in association with multiple Renault Clio Cup champions, team PYRO. Senna will pilot a race spec version of the Clio Renaultsport 220 Trophy in the Renault UK Clio Cup.

Bee Health’s brand of quality vitamins and supplements, FSC (www.fscsupplements.com), is advertising on Proctor’s car for the 2016 series.

Managing Director Steve Ryan commented: “We are delighted to support local sporting stars, especially those who are proving themselves at such a high level. We wish him all the best for the coming races.”

All 18 of the Clio Cup’s races will again take place at the high-profile Dunlop British Touring Car Championship’s events in 2016, meaning it’s drivers, teams and sponsors continue to enjoy unrivalled levels of exposure with huge trackside crowds and live TV coverage on ITV4. Bee Health produces over 70 million vitamin and supplement tablets a week at its 60,000 sq. ft. state of the art facility in Bridlington, for customers in over 40 countries.

Holland & Barrett, the UK’s leading health retailer, recently awarded Bee Health ‘Supplier of the Year 2016’ and the company specialises in vitamin, supplement and superfood private label and contract manufacturing for some of the world’s largest retailers.